A textbook example of what not to do 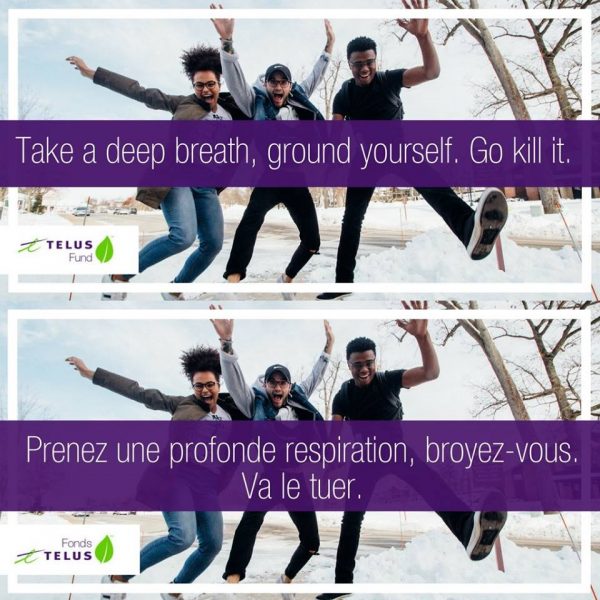 Translation services are not free, and sometimes, balancing between the cost and the end result or bottom line is not easy. In many cases, such as very limited in-house distribution, it may be safe to use web-based automated translation systems, such as Google Translate. But spending tons of money for an ad campaign distribution and saving a few pennies on human translation services is definitely the worse decision a company’s marketing department can make. It’s even more obvious when you’re a… communication company !

TELUS, who presents itself as « Canada’s official largest and fastest mobile network », recently learned its lesson the hard way. In a vast coats-to-coast Twitter advertising campaign for the TELUS Fund, with several different messages aiming at a young crowd with words like « Take a deep breath, ground yourself. Go kil lit », Telus parted from the usual cute animal kind of campaign mobile phone companies have used (abused ?) for years. Marketing messages all very human. But the human side of their messages was the only human element when it came to translate them.

Canada being bilingual, with a French population of over 7 million people (almost 22% of Canada’s population), most national companies have no choice but translating not only their websites, brochures and various communication tools, but even more so their advertising campaign. And usually, let’s admit it, large corporations do a pretty good job at it, if they want to make sure the French speaking market does not totally boycott them. And they usually rely on professional translation services to do so, or, in many cases, require some in-house French speaking employees to transform themselves into translator. A quick reminder here : being able to correctly translate a document is really not the same as simply being bilingual. It’s a trade, a job, a profession on its own.

But it appears someone, in TELUS’ marketing team, thought saving a few dollars was more important than making sure the French version was… in proper French !

The French version of the recent TELUS Fund Twitter ad campaign is, to say the least, not up to the standards French Canadians are used to. In fact, although most words are spelled correctly, when you try to understand the meaning of the sentence, well… it simply doesn’t make any sense at all ! Your average bilingual highschool student would tell you right away there is something really wrong in that translation. An example ? « Take a deep breath, ground yourself. Go kill it » became, in French, « Prenez une profonde respiration, broyez-vous. Va le tuer. » While Take a deep breath translation is acceptable, using « broyez-vous » for « ground yourself » is somewhat awkward… Broyer literally means « grind », like the coffee you may grind !!! And « Va le tuer », although a correct word per word translation of Go kill it, simply invites the reader to go and kill someone…

The reaction was instantaneous, with today’s fast spreading social media And needless to say it wasn’t a very positive reaction ! Remember : a large proportion of Quebec people are French speaking ONLY ! . In fact, TELUS Fund even had to temporarly close its Twitter account to « make sure their strict editorial and translation processes were followed ».

Clearly, the whole ad campaign TELUS offered to its French speaking clientele, as human as it was intended, was translated by… a machine ! Obviously, someone at TELUS did not take a deep breath or ground himself… The result : he or she really killed it ! In the wrong way !

About the Author: Sonya Messier